When it comes to a rapid, clear and elegant pathway to differentiation in competitive markets, design is almost predestined. Interstuhl, which produces B2B office chairs in the Swabian Jura, realised that as far back as 20 years ago. The company has been working with design firms continuously every since – including ID AID from Stuttgart.
Words: Armin Scharf
“Design is a key factor at Interstuhl,” says Patrick Loechle, head of marketing and product management at the company. Based in Swabia in southwest Germany, Interstuhl specialises in office and workplace chairs. Founded in 1961, the family-run business took a giant leap towards design in the early 2000s. Until then, a functional and technical mindset had prevailed; now it was time for the aesthetics to match. To ensure the market would sit up and take notice of this start signal, Hamburg architect Hadi Teherani was brought on board – and delivered an extraordinary design with seat and backrest shells made of aluminium, accentuated upholstery and details like hubless casters. Silver was launched in 2004, and soon had a following of enthusiastic users thanks to its original design.
As a result, Interstuhl continued to enhance its design credentials. “Design is the best way to differentiate yourself in the market,” says Loechle. “The first visual impression, the product experience, is important, you only really take a closer look at the functions after that.” But, he continues, that doesn’t merely mean regarding design as an aesthetic wrapper for the underlying technology. At both Interstuhl and Bimos, the company’s brand for industrial and laboratory chairs, “Design is generally involved right at the start of development,” says Sven von Boetticher, whose design agency ID AID has been on board since 2011. His team designed the UPis1 stool, for instance, and is also behind the NEW EVERYis1, a relaunch of the entry-level office chair EVERYis1 featuring updated elements that include a new back frame and armrests. “We kept the core design but gave it a facelift and added some new family members,” says Von Boetticher. “It’s always essential for the visual ergonomics to be right: as soon as you see it, the chair design has to signal that everything about it makes sense.” 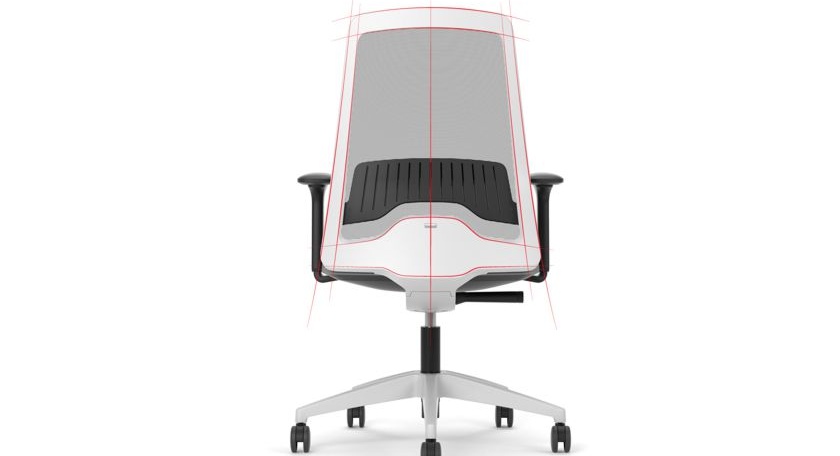 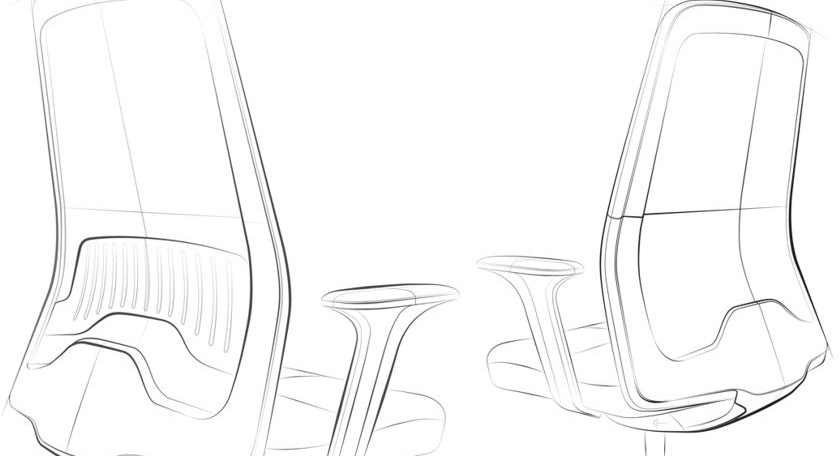 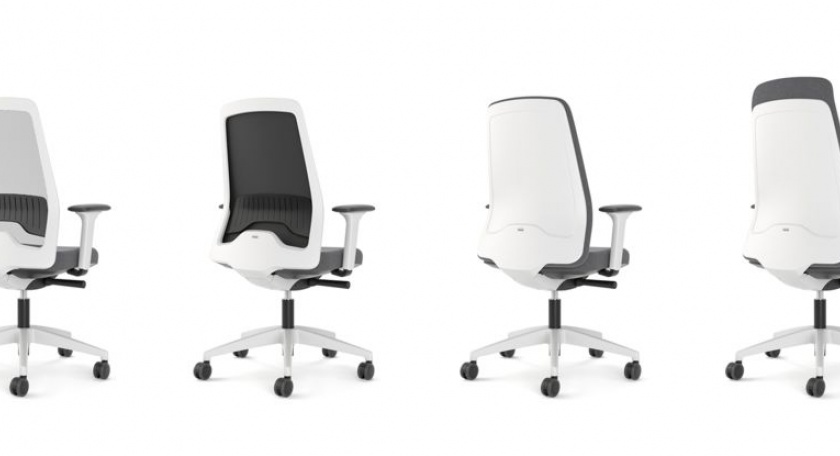 Product updates aren’t always as extensive as in the case of NEW EVERYis1. Nevertheless: “Interstuhl is constantly striving to improve and simplify its processes and become more efficient,” says Von Boetticher. That’s because the office furniture sector is extremely cost-sensitive – if there’s a better, simpler and lower-cost way to do something, Interstuhl is quick to implement it, even within existing product lines. In that respect, the company benefits from its high degree of vertical production: Interstuhl makes virtually everything itself at its headquarters in Tieringen, which is near Balingen in the Swabian Jura region of southwest Germany. Interstuhl thus demonstrates that a company can be internationally competitive even if – or precisely because – it has its manufacturing base in Germany. Whatever the case: it has an export ratio of over 42%, operates showrooms around the globe and sells its products via specialist dealers. What’s more, its in-house production capacity enables Interstuhl to pursue an independent platform strategy: the mechanisms, seat parts and other mechanical elements are ready and waiting for cross-model integration – and improve the cost side of the equation.
The NEW EVERYis1 office chair

Design principles instead of a design manual

So does Interstuhl have a design language? “We don’t have a design manual,” says Loechle. “The link between the form of the individual chairs is the shape of the backrest, which narrows towards the top.” And it’s true: the Silver adheres to this principle, as does the NEW EVERYis1 and the Labsit laboratory chair from Bimos. And it’s highly unlikely that there’ll ever be anything like a classic design manual: “These days I think it’s more a question of setting the directions you want to go in – of adopting design principles rather than formalism,” explains Loechle. Von Boetticher adds: “Interstuhl’s understanding of design centres around the distinct identity of the different product lines.” But that doesn’t mean unlimited design freedom – quite the contrary. “Design-to-cost is a top priority, so we always strive for high design quality.” As a result, design for design’s sake doesn’t have much of a chance at Interstuhl; instead, the design always evolves in the course of a cooperative, pragmatic and goal-oriented process. At the same time, however, “The design is often the starting point of a development, driven by a detailed briefing that defines precise guidelines in terms of the market segment, target costs and user group,” says Von Boetticher. Loechle: “We define what’s important while still leaving plenty of scope for interpretation.” Ultimately, the decision in favour of a certain design is made in the course of product meetings with management, product management and the heads of development and sales.
The Bimos laboratory chair Labsit 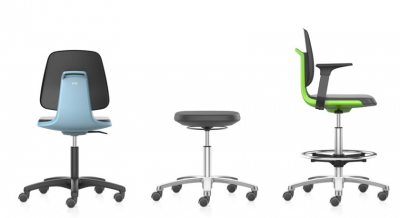 Besides the platform principle, materials play a major role at Interstuhl as well: minimising the input is a top priority. First and foremost that reduces costs, but it’s an advantage in terms of logistics too: less material means less weight that has to be transported from A to B. In addition, it’s important that the chair can be separated into monomaterials at the end of its life: according to Interstuhl, 98% of the materials in the NEW EVERYis1 are recyclable. “That means we have to incorporate clear separations, and that definitely has an impact on the design,” says Von Boetticher. That was precisely the reason why the UPis1 stool received a Special Mention in the Focus Open 2016 contest: rather than being stuck together, it consists of monomaterial parts that can be disassembled and returned to the loop. Then, in 2017, the Bimos laboratory chair Labsit was awarded the Focus Open Gold – partly because even the underside is perfectly designed. The only way for a designer to achieve this degree of perfection and stay on the right side of the cost target is to become intensely familiar with the client’s production processes and capabilities. “That’s why we rely on long-term partnerships,” says Patrick Loechle. “It’s important for designers to have an in-depth knowledge of the subject matter and be aware of the functionalities and health-related aspects of sitting.” On the other hand, he adds, “It’s not so much that we look for specialists who develop nothing but office chairs, it’s more that we look for creatives with experience in other areas too, because they bring fresh impetus. ID AID is a very good fit in that respect. We’re used to one another, the chemistry is right, and we collaborate in a clear, open and objective way. And there’s something else that’s really important: they understand our commercial interests.”
The UPis1 stool 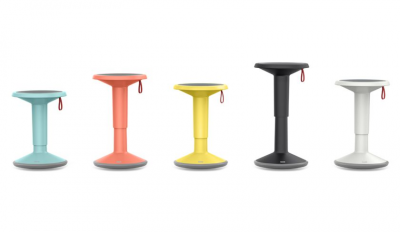 The family-run company with roots in blacksmithing was founded in Tieringen in 1961. A year later it launched its first chair, the Bi-Regulette, which featured a patented height adjustment system and was specially developed for the booming local textile industry. Today Interstuhl employs more than 850 people and reported annual turnover of more than €170 million in 2018. The company has an export ratio of 42% and sells its products internationally through specialist dealers. Interstuhl also owns the Bimos brand, which focuses on industrial and laboratory chairs, as well as the gaming chair brand Backforce.
www.interstuhl.com 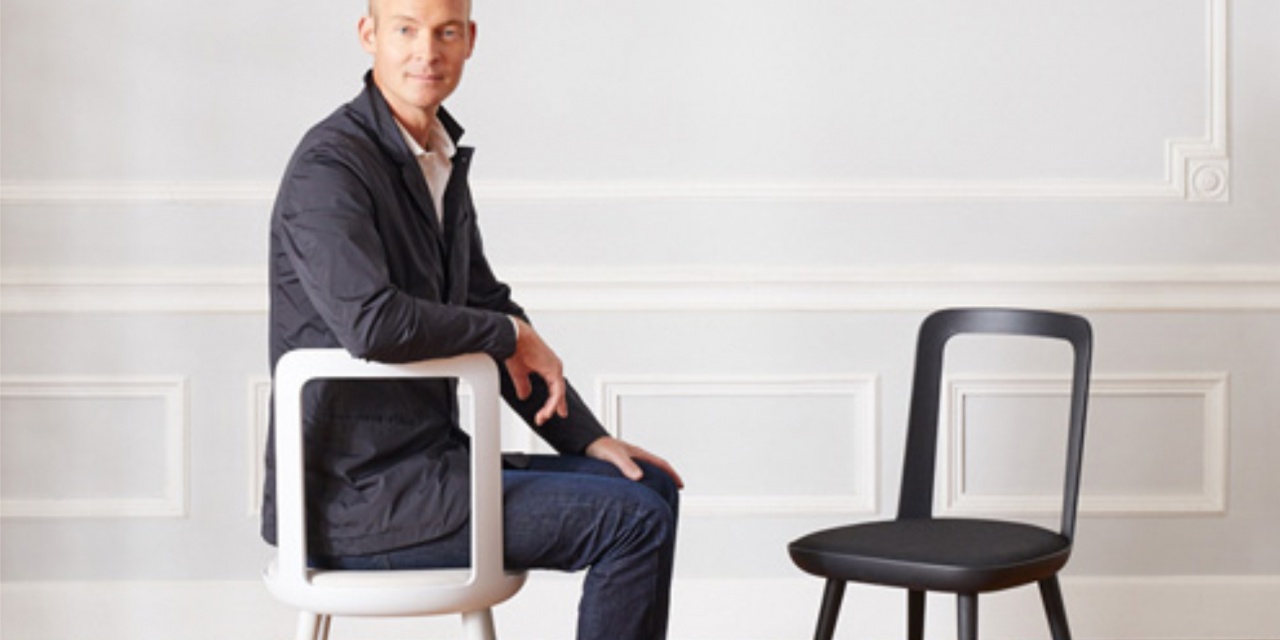 Sven von Boetticher founded ID AID in Stuttgart in 2011. The firm’s clientele mainly consists of SMEs from a variety of sectors. The cross-sector transfer of material and process innovations plays an important role for ID AID, which is why its current team consists of four designs and an interior designer. Besides providing a holistic service for its customers, the firm aims to develop “archetypal product solutions and authentic brand communication concepts”.
www.idaid.com