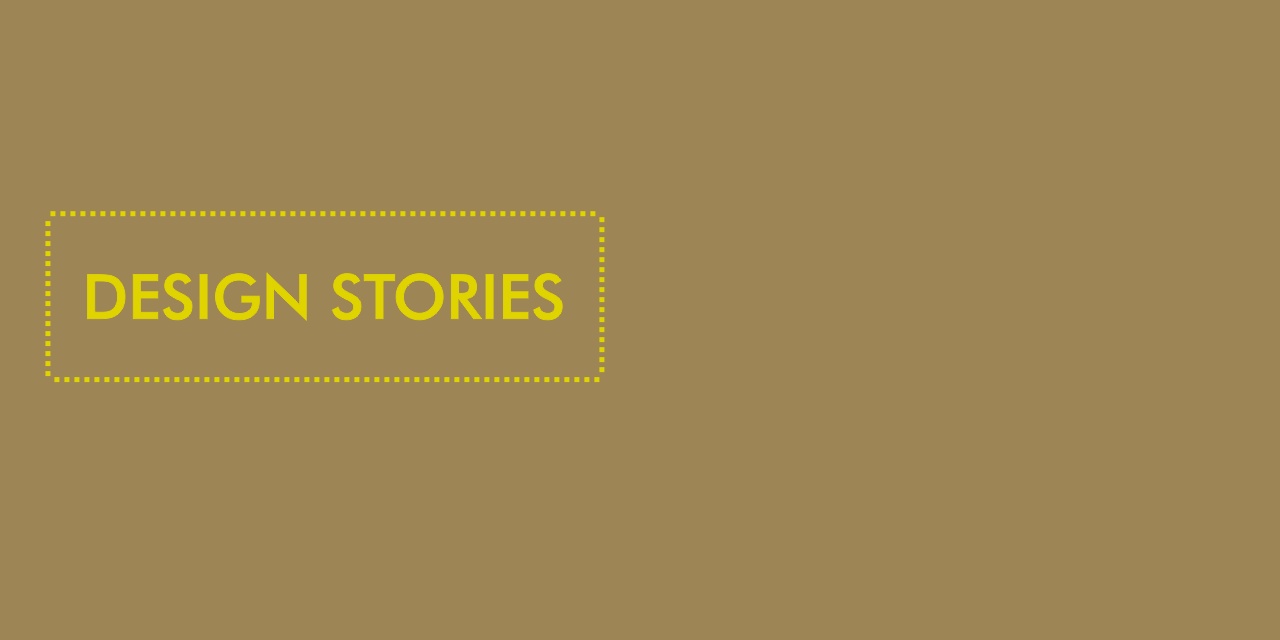 When it comes to bike lights, Supernova is an innovation leader and has won the Focus Open Gold multiple times. The company’s founder, Marcus Wallmeyer, is actually a transportation designer – and a long-distance cyclist. It all started with an empty tomato puree can.
Interview: Armin Scharf
The bike sector is a very special market. It continues to be fuelled by passionate cyclists who are willing to take the initiative so as to find solutions for recognised weaknesses.
Marcus Wallmeyer is one of them: he wanted better light for training rides, founded Supernova and today, with more than 50 staff to help him, produces innovative – and above all bright – front and rear lights. What’s more, Marcus Wallmeyer just so happens to be an industrial designer as well. 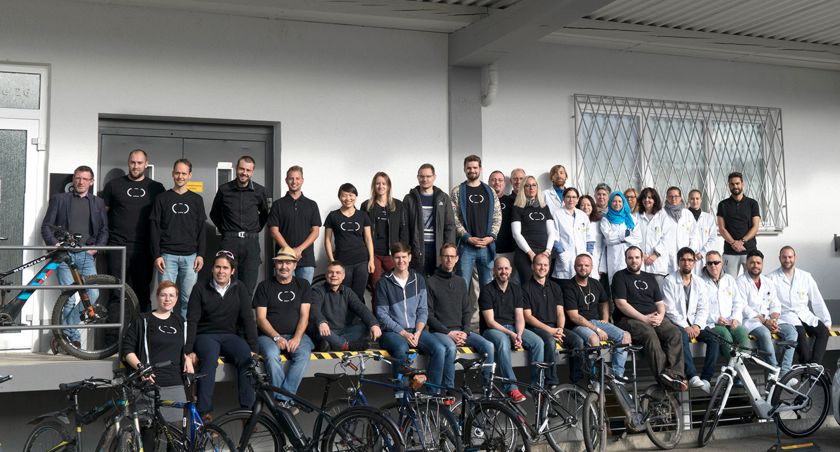 The Supernova team around two years ago. In the meantime, several more staff have joined the crew on the ramp.

Mr Wallmeyer, you’re both an entrepreneur and a designer – that’s an interesting double role.

The first bike light I developed was just for my own use so that I could train at night as well as during the day. I’d already founded Supernova before I started studying design. The decision to turn it into a full-time mission came after I graduated. Thanks to the growing demand for the hand-produced front lights I was making on a small scale, it was an easy step to take. Over the years, it turned out to be a major advantage that I wasn’t just the decision-maker but in charge of design as well. To this day, my passion for design and my entrepreneurial skills complement each other, they go hand in hand in a completely natural way.

Legend has it that your first product was based on a tin can. When was that?

Around 1995. I used a tomato puree can to build myself a halogen light for the front of my bike. It’s important to understand how I ticked back then: all I thought about was cycling. I was doing around 20,000 kilometres a year on my bike and eating virtually nothing but pasta with tomato sauce, so the empty tins piled up. Actually, I thought they were pretty cool, and it just so happened that they were the perfect size for a 50mm halogen lamp from the DIY store. I bought a six-kilogram rechargeable battery from a motorcycle dealer and put it in a handlebar bag. It was pretty heavy, but it meant I had really good light for hours at a time, so I could do my basic training whenever I wanted. At night, for example: I’d spend four or five hours cycling along the Rhine in the dark.

Creating a product for your own use is one thing – building a successful company is quite another.

The firm grew in very small stages – and has always been self-financed, by the way. Right from the start, it was things like robustness and longevity that mattered to me – and of course having the brightest lamp available on the market. As a 24-hour racing cyclist, I knew that with the right light it was possible to do the same lap times at night as during the day, so the headlight could give you a crucial competitive edge. Word of my headlights spread like wildfire in this niche market, and demand became international. But those early years were no picnic: I was taking in just enough money to buy the materials to make more lights, and I worked until well into the night making them single-handedly. The 24-hour races and night rides with enthusiastic friends gave me the stamina I needed. Once I graduated, I moved out of my parents’ garage in Oberkirch and found new premises in the Freiburg area. Development advanced rapidly and there were new products every year. When I got to know the product manager of a US bike manufacturer at the Cape Epic stage race in South Africa and he ordered 5,000 dynamo lights the following year, things really took off. Our annual revenue has been growing at a rate of between 30% and 50% ever since.

How do you manage that?

We’re passionate about ensuring we always lead the market in terms of technology. We were the first to make LEDs standard in front lights, for instance. And we introduced lithium-ion batteries and a high beam function many years before our competitors too. In the meantime, Supernova has become a name that’s known all over the world, but to my great delight it’s managed to retain the dynamic startup spirt of my early years. 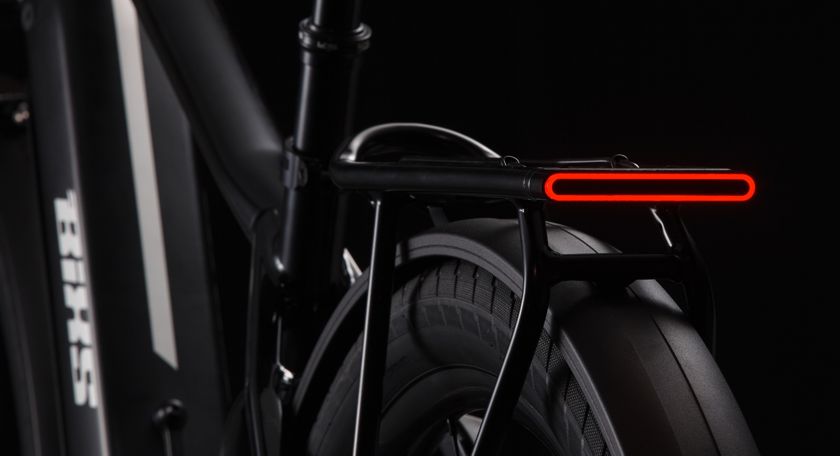 Integration is a major issue in the bike sector – and Supernova shows how it’s done: the M99 TL2 rear and brake light is integrated into the pannier rack.

Why were bike lights so dim for so long?

People just accepted the pathetic status quo. But because that wasn’t an option for me, I changed it and was my own customer, so to speak. We’ve kept that customer-oriented approach right up until today. With every new development, we always take to the saddle to experience the light for ourselves. Even we’re surprised sometimes – for instance when you realise that the light suddenly dips completely when you’re cycling downhill and the fork dives as you ride through a depression in the terrain. And it was the knowledge that there’s zero visibility on bends that resulted in our high beam, which has an unusually wide beam angle and good curve illumination. 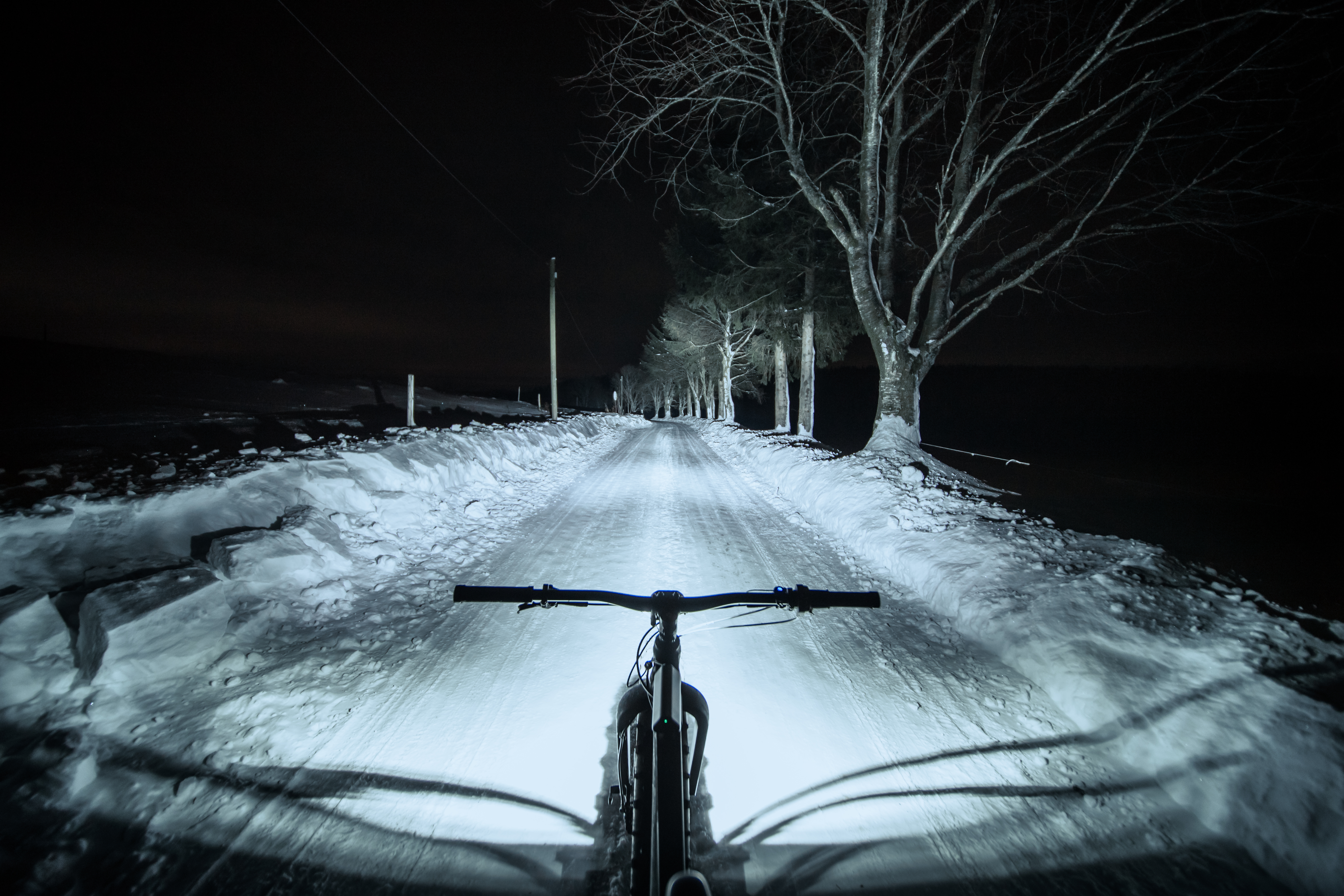 Front light with high beam function: the M99 Mini Pro B54 illuminates the road far ahead – an especially important feature for fast e-bikes.

Has the light-emitting diode simplified the whole bike light issue or made it more complicated?

In the early days, LEDs were nowhere near as bright as our gas discharge lamps, but in the meantime they’re our light source of choice. Good cooling and electronic control of the system are important. With LEDs it’s also much harder to calculate the optics, i.e. the reflector, than it is with a filament. We develop all the electronics internally – our engineers are also passionate cyclists who test the prototypes themselves. That makes us agile and means we can launch complex technical innovations quickly.

What does a new development start with? The idea, the technology or the design? And how do engineering and design come together?

The idea and customer need come first. If you’re constantly using a product yourself, new ideas just come to you. It’s not always easy to combine engineering and design harmoniously, but our many years of experience have taught us that it’s well worth putting more time and effort into implementing really good design. I’ve never regretted going the extra mile in development to reach an ambitious goal.

How important was the advent of the e-bike for Supernova?

The e-bike played an extremely important role in fuelling our growth. We were the first to offer e-bike lights. Other companies hadn’t bothered, probably because it didn’t seem like the law would permit e-bike lights: to begin with, a dynamo was mandatory on every e-bike. Once the law was adjusted accordingly, we realised what an opportunity it was straight away, and thanks to the higher output of the battery that powers the motor we were able to produce even brighter lights. 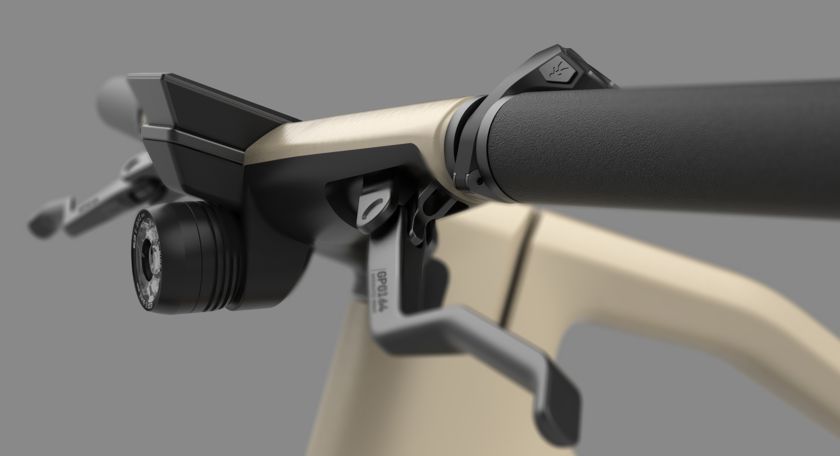 I can see how e-bike lights could be an OEM market. But what role does the retrofit sector play for you?

Both markets are similarly important. We supply around 90% of all well-known bike manufacturers with front lights as original equipment. But the retrofit market is just as important because then we’re the ones in direct contact with the customers, and we often get valuable feedback from them that we use as inspiration for our ongoing research and development.

Supernova isn’t the only player in the bike light sector – how do you differentiate and position yourself in such a narrow market?

Our design is particularly timeless and is noticeably different from that of our competitors’ products. Unfortunately, however, it’s becoming increasingly common for design to be copied, so we focus on offering the best performance, unbeatable reliability and the best service. Although that means we don’t capture the mass market, it’s clear that our niche has a growing number of fans. And there’s something that’s relatively new in the bike sector but has been important to me for a long time: sustainable and resource-efficient production. That’s something we’ve been optimising continuously for years, and there are more and more customers who appreciate that.

2020 was our most successful year yet and we had the biggest growth we’ve ever seen. Despite corona, we didn’t have to apply for short-time schemes; we worked all the way through and pinned our hopes on further growth. But of course the pandemic continues to put considerable extra strain on our staff.

Do you produce everything yourself at your own site?

We can make every one of our front lights here in Freiburg-Gundelfingen. What we make here is mainly for the retail market. Production always kicks off in Germany. Then, as volume increases, we use our production facilities in Asia too so that we can keep delivery distances short when supplying the market there. So we make some products in Germany and Asia at the same time. But there’s one thing we never let out of our hands: the complex matrix reflector – that’s the key part of the front lights and produced exclusively in Germany.

Where do you think the bike sector is headed in the next few years?

The bike sector will continue to see enormous growth and evolve rapidly. Offering more eco-friendly alternatives is the only way to tackle “the car problem” – and I think the e-bike will play a hugely important part in that. In my opinion it’s going to play the leading role when it comes to shorter distances, and especially for commuters. And cargo bikes will become an increasingly popular option for deliveries in urban areas, so I can imagine we’ll be seeing a lot of changes in their appearance and construction.

What bike are you using right now? And is there a local route that you’d you recommend?

I get to ride so many fantastic bikes that I really couldn’t pin myself down to any particular one. I’m riding nine or 10 different ones right now. The majority of them come from customers and we use them for testing our products. For me, that means riding in all weathers, during the day and at night. As for recommending a route, that’s not easy either. Here in the Black Forest, you’re spoilt for choice. But I guess I would recommend the “extended version” of my trip to work – via the Kandel, the imposing mountain right on Supernova’s doorstep. 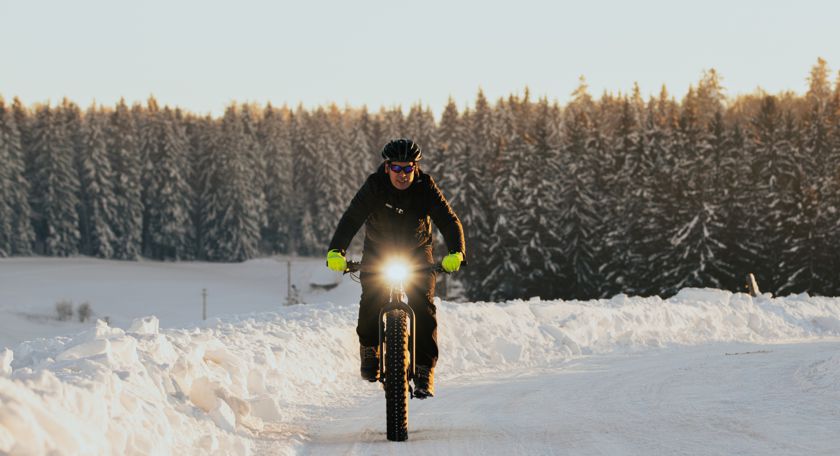 Still puts every light to the test himself: Marcus Wallmeyer on a fatbike in the snow-covered Black Forest.

In 2006 the firm had a staff of one. Today, more than 50 people work for the medium-sized company – a sign of its strong growth, which began well before the bicycle boom in 2020. Today, all the lights Supernova produces are based exclusively on LEDs. Located near Freiburg, it counts many famous bike brands among its customers, as well as supplying the retail sector’s retrofit market. Supernova is one of the Focus Open competition’s most frequent winners and counts four Focus Open Gold awards among its many successes.
www.supernova-design.com 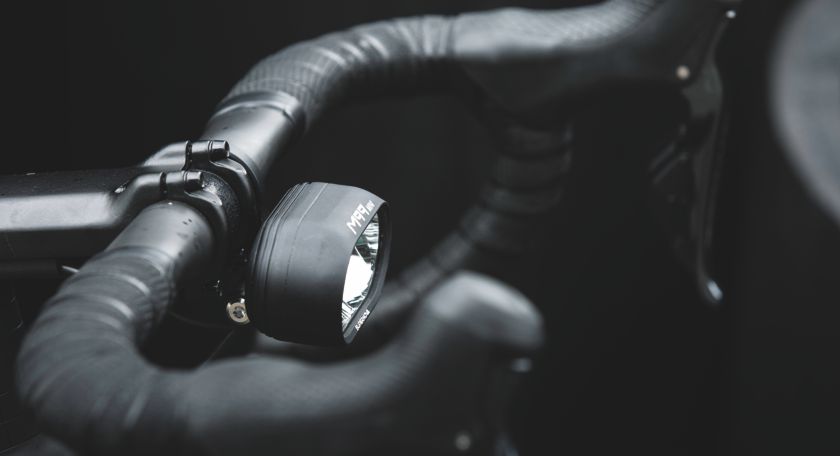 The proud winner of a Focus Open Gold in the 2020 competition: the M99 Mini Pro B54. It comes with its own heatable battery and is intended for “muscle-power” fans with a gravel bike. 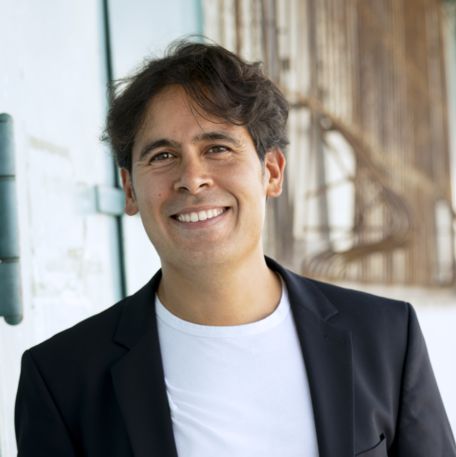 ...studied transportation design in Pforzheim. His 2003 finals project, submitted together with a fellow student, explored the vision of an interstellar spaceship for travelling to Alpha Centauri – a theme that arose from his contact with NASA scientists during an internship in Hollywood. After graduating he went to California on a scholarship to work on designs for science fiction films. During that time he ran Supernova from afar.