speedE, the first electric screwdriver shaped like a conventional hand tool, comes from the Black Forest: an innovation that caused a sensation in 2018 and has been regarded as a benchmark ever since – not only for electricians. Wiha produces tools for professionals, including screwdrivers, pliers, bit sets and L-keys. The owner-managed company has been growing strongly for about 10 years and today has a presence not just in Europe but in the US and Asia too.

We spoke to Stefan Kiefer, head of graphic, about innovation, professional users and design’s contribution to the firm’s international success.

Wiha numbers among the regular winners of the Focus Open award. Who makes the design decisions?

We have extremely flat hierarchies, so both communication and the design processes are very efficient and straightforward – not just within the department but between departments too. At the same time, that means everybody involved has a strong sense of responsibility – and the ambition to achieve the optimum. But management is obviously included in any major decisions.

It takes a certain awareness within the company to foster design – especially successful design. How far back does Wiha’s commitment to design go?

To about the mid-1990s, when Wiha commissioned the Fraunhofer Institute for Manufacturing, Engineering and Automation IPA to do a largely ergonomics-driven design study on screwdrivers. It led to the Soft Finish series, with handles made of two components. That was a very sustainable project, because we’ve been producing the screwdrivers virtually unchanged ever since. In 2015, long after its launch, the Soft Finish series was awarded the German Campaign for Healthier Backs’ independent seal of approval because of its exemplary ergonomics. We were thrilled to get such a meaningful accolade, especially so much later.

So the focus is on the ergonomics?

Yes, that’s right. It’s an elemental factor because our customers are professional users who work with the tools day in, day out. But aesthetic aspects come a close second, followed by branding. Actually though, branding is becoming increasingly important for ensuring awareness among our users. We used to print our logo on the handle of the tool but it gradually wore off over the years, so at some point the users didn’t know they were using Wiha tools any more. That’s why we’ve only been using injection-moulded logos for about three years now: they’re permanent. That way we ensure the tools are associated with the brand long term. 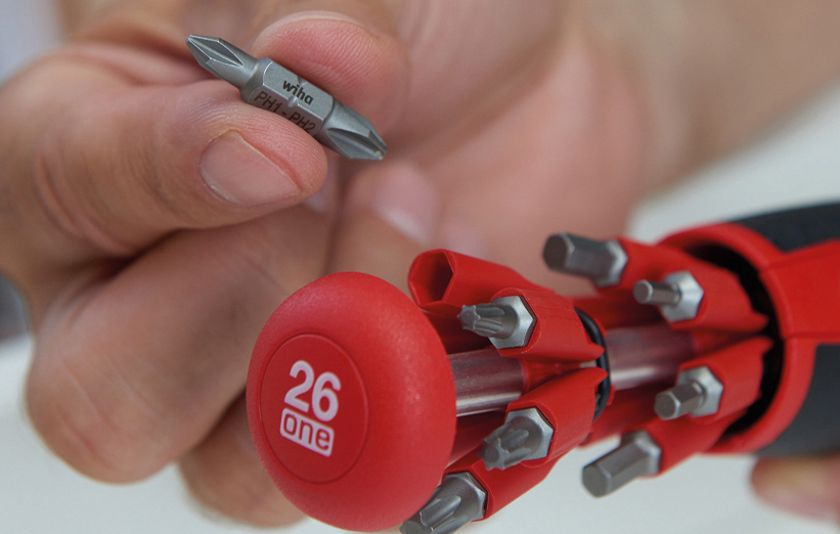 In 2017, Wiha received a Focus Open Silver for its Liftup 260NE bit holder. The 12 double-ended bits that are stored in the tool’s handle fan out when it’s extended.

In the current Focus Open competition you won an award for a set of L-keys – which is essentially a very well-established tool. How do you manage to keep optimising things that have been around for so long?

To be honest, we’re surprised at how much room for improvement there still is ourselves. The set you mentioned features two optimisations. We designed the holder in such a way that when you twist one key all the others fan out, which makes it easier to identify and remove the one you’re looking for. And the individual keys are colour coded as well. That’s not really new, but the fluorescent paint is. It makes the keys easy to find, even in dark surroundings. We take a very user-oriented approach – that’s a matter of principle for us.

How do you make sure you stay in tune with the market?

For a long time now, we’ve been working with a select group of professional users who evaluate prototypes and ideas for us. Because we ask for outspoken feedback, we’re very much in touch with our target group.

Is that how speedE came about too, the electric screwdriver that won you a Focus Open award in 2018?

Yes, it was something the market wanted. Electricians can’t use a normal cordless screwdriver to wire an electrical enclosure because a very specific torque has to be used to tighten the screws. That’s why they always worked with a manual torque screwdriver in the past, which is obviously very time consuming and tiring. So we spent a long time working on an electric solution. It was challenging, but everybody involved put a lot of passion into it. Maybe that’s what’s special about Wiha: we keep working away at something until we’ve found the optimum solution, no matter how much time and effort it takes. 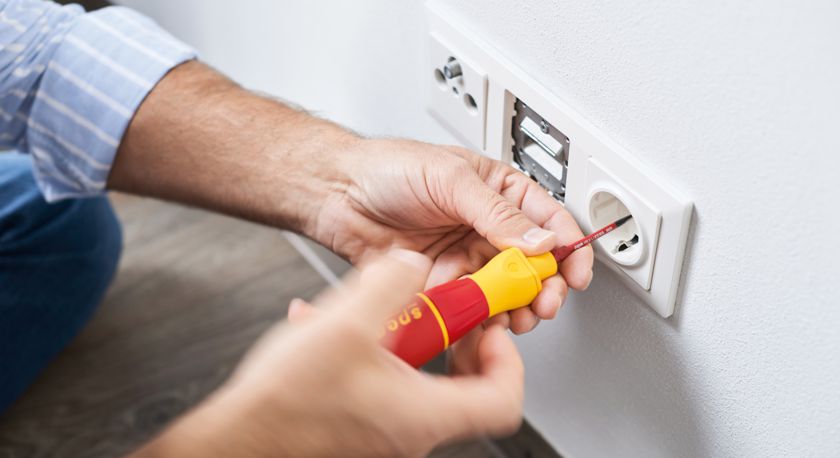 At what stage of a development does the design team come on board?

At the outset; from then on, engineering and design work hand in hand. And sometimes only the design team is involved if there are no technical changes to be implemented.

Yes, especially when it comes to new product lines. We’ve worked with various design agencies in the past. But if it’s a question of individual products, the design process generally takes place in house – in close collaboration with engineering, obviously. We’ve had very good experiences with that approach.

Is there a typical Wiha design language?

Yes. We aim for very simplified forms that make good ergonomic sense. We use colour to differentiate hard and soft zones, which visualises the ergonomic qualities. Our mechanical products are black and red, whereas the electric tools are red and yellow. And obviously our logo is always eye-catching and – as I said before – hardwearing.

What are you working on right now?

We’ve been working on switching from blister to cardboard packaging for quite a while now, and we’re aiming to complete the process by mid-2022. That might sound simple, but we had to resolve some fundamental issues – like the fact that blister packs show the potential buyer what they’re getting. But cardboard packs don’t, so we had to develop a new solution. We brought an external design agency on board for support.

So is design an important market factor for Wiha?

If it’s communicated properly, good design definitely has an influence on the purchase decision – and that goes for the B2B sector too. Design plays an important role in our product development – that’s become a matter of course. 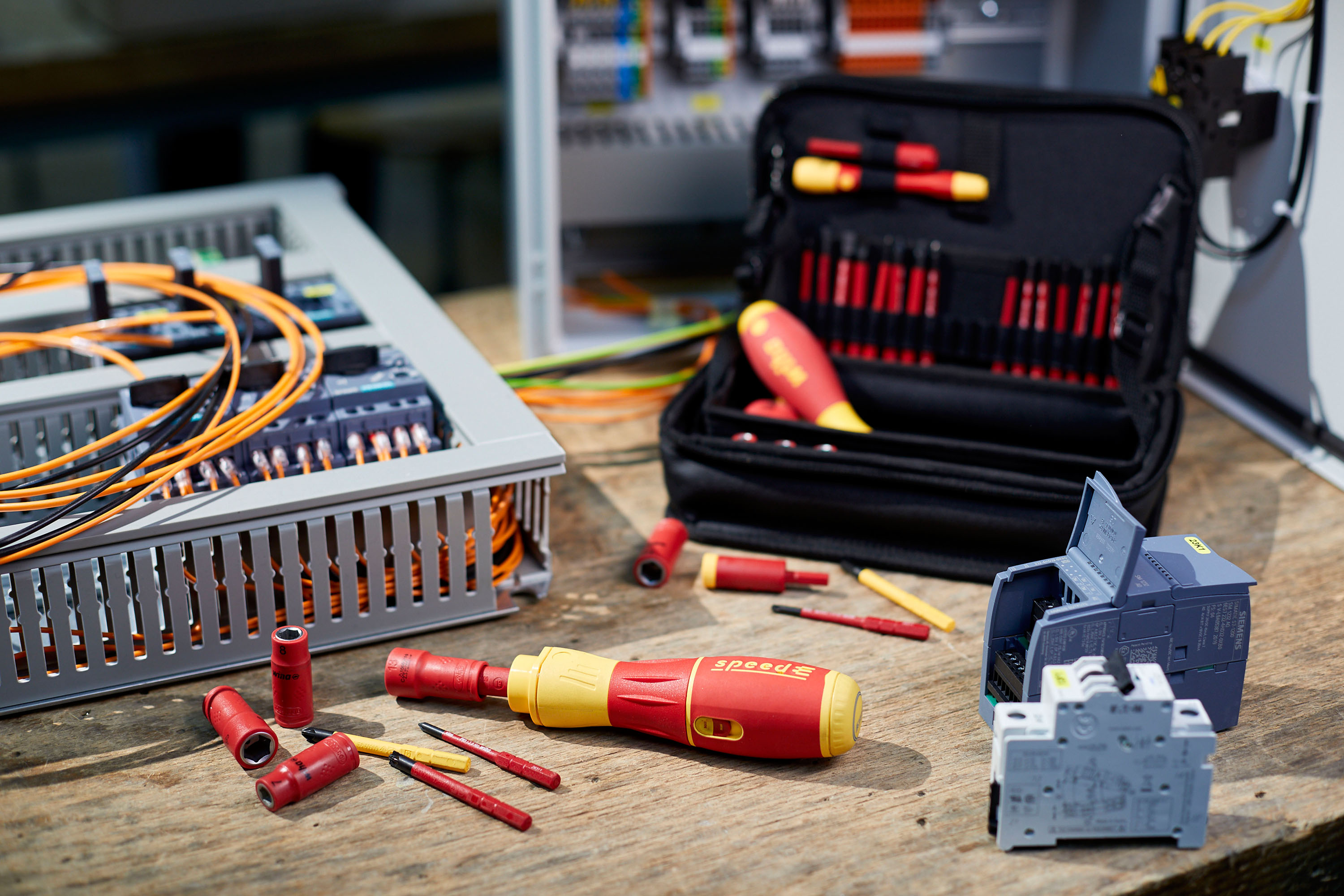 And how important are design awards like the Focus Open for Wiha?

They always make us feel very proud, because the awards are an endorsement of our work, and in a way they’re a reward for all the effort we’ve put in as well. We reference the awards in our communications, and they’re definitely playing an increasingly important role, also with regard to the younger generation, which tends to take design for granted. But the most important thing of all is for the product to prove its worth in an everyday work setting.

Founded in Wuppertal by Willi Hahn in 1939, Wiha relocated to Schonach in the Black Forest in 1943 and still has its headquarters there today. Wiha also continues to be an owner-managed family business with flat structures. At its various locations, the company primarily develops and produces tools for professional users in industry and the skilled trades. In 2018, Wiha launched speedE, its first electrically powered screwdriver.
www.wiha.com 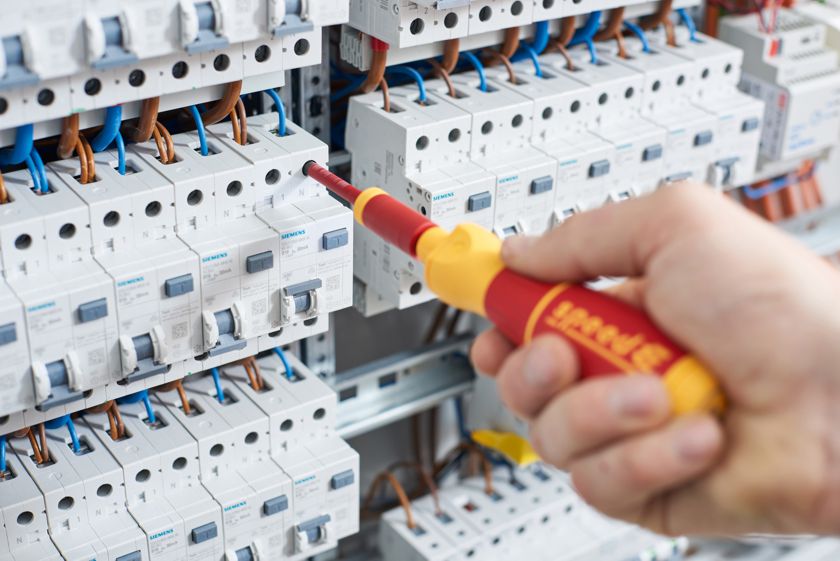 Simplifies the wiring of an electrical enclosure: the speedE electric screwdriver, which won a Focus Open award in 2018, is setting new benchmarks for electricians.