What can be done to help people with physical limitations stay mobile and take an active part in the world around them? Alber GmbH in Albstadt provides intelligent solutions with an electric core, designed by external studios. There’s no question that Alber is on the right track – as the many gold awards the company regularly receives from the Focus Open design competition go to show.
smoov one
The latest prize came in 2019, when Alber – this time together with UP Designstudio – once again received the Focus Open Gold. Smoov one is a compact dock-on drive unit for younger, very active wheelchair users.
The Swabian Jura isn’t really what you’d call productive land – at least not agriculturally speaking. But it’s extremely fertile territory for other things – like innovations, ideas and technologies. Take the area around Albstadt, for instance: once dominated by the textile industry, the region is now home to a cluster of technology producers. One of the new players was founded in 1986; starting with just five employees, the trades-based company developed a motorised stair-climbing aid called the scalamobil. By 2019, the Alber GmbH workforce had grown to around 300 staff and the company is in the process of building a large development centre for new mobility aids – both for people with disabilities and for bike owners who don’t want to depend on muscle power alone to get them to their destination. Alber produces electric hub motors and pushing aids for wheelchairs, add-on scooters like the e-pilot, which docks onto the front of the wheelchair, the successors to the original scalamobil and a compact power assist add-on for active wheelchair users called smoov one 010. In 2012, Alber launched its Neodrives brand and entered the market for electric bike drives – a natural step in view of its expertise in developing motors and integrating batteries and controls.

The changing juries of the Focus Open design contest present Alber with awards on a regular basis – for design and innovation. The above-mentioned smoov one power assist was the most recent product to receive a Focus Open Gold. As a separate sub-brand, smoov one is mainly intended to appeal to younger target groups. Black, compact, self-sufficient and fast: the drive unit, which contains not just the hub motor but the battery and electronics as well, is designed to be mounted and detached quickly and easily for maximum flexibility. The user can dock it onto their wheelchair whenever they need extra support, for instance on mountain paths or long, fast-paced excursions. The powerful assistant permits speeds of up to 10km/h and a range of 20 kilometres. It was developed in collaboration with UP Designstudio from Stuttgart. Design is a tradition at Alber: “In the early days of the company design didn’t play any role, but that changed more or less overnight in 1995,” explains Bernd Engels, head of product management. Back then, the family-run business was sold to an SME holding company, bringing new management and different perspectives. Design has been a fixed part of the development process ever since – and is integrated at an extremely early stage.

First the design, then the engineering

“We start a new development with an innovation sprint lasting several weeks. That results in a rough concept that’s already been through the initial evaluations with customers,” says product manager Thomas Müller, who was most recently in charge of the concept for smoov one. But instead of subsequently activating the engineering and technical development teams as is usual practice, the next step at Alber is to get design involved. “That adds another, different perspective,” says Bernd Engels. “It’s very stimulating.” That’s partly also because designers have the ability to translate ideas into objects quickly – or to put it another way, to build simple prototypes that “make the discussions a lot more intense”. Now, you might think the design ends up giving way to the constraints of the subsequent engineering development – but you’d be wrong. “The design takes priority,” says Thomas Müller. “If it’s impossible to implement from an engineering perspective, we go back a step until everything’s right.” The design team stays involved until the product is rolled out, explains Müller, so that details, improvements and user feedback can be incorporated straight away.

Alber works exclusively with external design firms – three of them right now: DesignGen from Munich, Einmaleins from Burgrieden and UP from Stuttgart. “Longstanding collaborations are important to us because our products have to meet very specific requirements and the needs of very wide-ranging user groups,” says Engels. “Our products have to be just as suitable for kids as for a 99-year-old who’s had a stroke. It’s as much about reduced hand strength as it is about motor deficits.” Usability, fitness for purpose and a good knowledge of the target groups are crucial requirements for the design and the designers, and that presupposes learning curves, which makes it difficult to switch design firms spontaneously. The details are always important: “We attach great importance to the controls, for instance – their size, the tactile feedback or a user interface that’s easy to interpret and read. Sometimes adapting aspects like that to the users’ abilities can be quite a challenge for the designer.”

Low-volume production and a regulated market

And there’s something else that plays a crucial role for Alber: “We produce on quite a small scale.” Engels estimates annual demand for electric wheelchairs in the whole of Germany at 16,000 units. Although Alber has long since been active in other countries, including the US and Canada, the annual production volumes for the individual models tend to be in the four-digit range. “Obviously that has an impact on the production methods we can use economically,” says Engels, “and we expect a good designer to take that into account right from the start, even at the concept stage.” Although in fact, Alber is essentially an assembly operation and uses cellular manufacturing methods to assemble the components it buys in from suppliers – most of them regional.
The requirements are high: “We make medical products that have to be 100% safe to use,” says Engels. At the same time, the market Alber serves is “highly regulated”. In other words, 98% of Alber’s output consists of reimbursable rehab products. In Germany, health insurance companies, pension funds, occupational insurance associations and civil service pension schemes determine which “sufficiently cost-efficient” products come into circulation by approving them for what’s known as the Medical Aids Index. You could be forgiven for thinking that design doesn’t play any role in such a context. But in fact, the reverse is true: design doesn’t just optimise usability, it also communicates quality, symbolises durability and signifies a safe investment. And even bureaucrats find that convincing!


In 2014, Alber won a Focus Open Gold for twion, a drive that provides support for active manual wheelchair users. The wheelchair’s normal wheels are simply swapped for Twion wheels. The motor, batteries and controls are all in the hub (design by DesignGen). 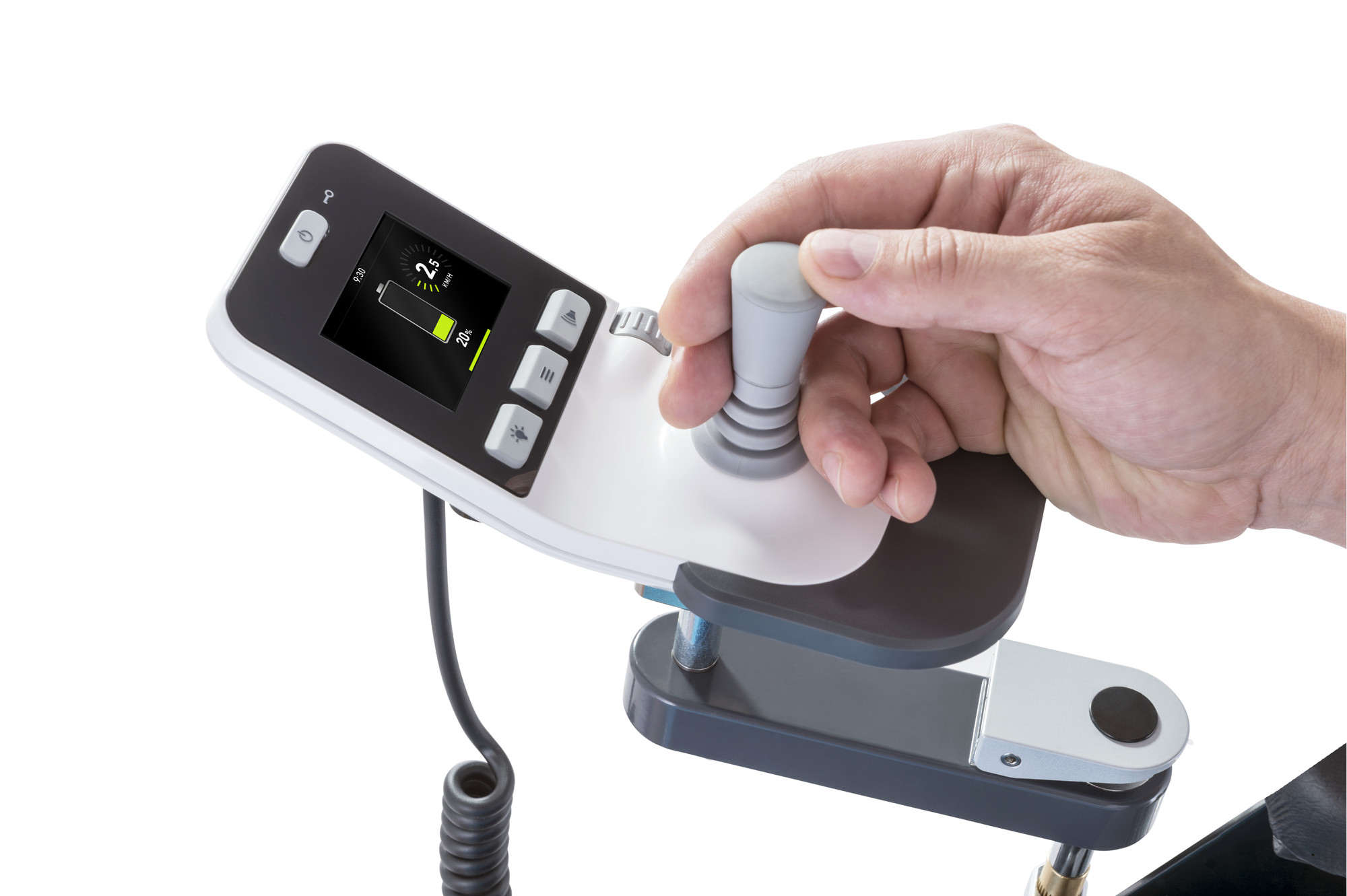 The e-fix 35 is also designed to provide support – and was presented with a silver award by the Focus Open jury in 2015.

In 2018, Alber entered its e-pilot add-on scooter for the Focus Open contest – and won a gold award. It was designed by Munich-based company DesignGen.

Founded in 1986, the family-run company Hass & Alber Haustechnik turned its attention to developing stair-climbing aids. The first model, the scalamobil S10, was launched in 1988. Even back then, the product’s compatibility with all standard wheelchairs set it apart from the crowd. In 1991 the company started focusing on electric wheelchair drives as well. After being sold to SME holding company Domus Healthcare in 1995, the firm produced a succession of new drives, most of them intended to provide support for wheelchair users with an active lifestyle. Since 2004, Alber GmbH has been part of US company Invacare, but still operates on a largely independent basis. Alber currently employs approximately 300 people.