BRAND FEELING TAKES TO THE AIR

Carmakers aren’t the only fans of model updates – sailplane manufacturer Schempp-Hirth is a great believer in the subtle optimisation of its fleet too. Take Arcus, for instance, a two-seater with an outstanding flight performance: around 10 years after its maiden flight, it’s undergoing various changes that will enhance it even more. They include new winglets, a modified elevator, a cockpit with a smaller cross-section and what’s known as a bug wiper. Parked in a recess next to the wing root to reduce drag until activated, the bug wiper glides along the leading edge of the wing to remove dead insects. That’s good for the aerodynamics too – not just in competitions but during normal flights as well, which quite often pass the 1,000-kilometre mark. The better the sailplane glides, the further it can fly – it’s that simple.

For the first time, Schempp-Hirth is now combining the improvements visible from the outside with substantial changes to the cockpit. “We realised there was room for improvement a long time ago,” says Ralf Holighaus – he and his brother Tilo are the managing partners of the family-run company in Kirchheim/Teck. The cockpit is an accumulation of instruments, handles, levers and written instructions – a confusing sight for non-pilots to start with. This diversity has evolved over the years and often follows from the strict approval conditions imposed by the aviation authorities. In 2018 Ralf Holighaus, a design enthusiast himself, brought design agency Ottenwälder und Ottenwälder from Schwäbisch Gmünd on board. The goal: a cockpit with a look and feel that underscores the Arcus’s high-end qualities.

Obviously that’s easier said than done, even for the industry-savvy professionals from Schwäbisch Gmünd. “The scope was very narrowly defined,” explains Max Ottenwälder. The designers’ freedom was considerably restricted by both the approval regulations and the engineering specifications. “To start with, we took a good look at the boutique production processes and explored the options for making changes inside the cockpit. We realised there was a certain contradiction between the total perfection of the elegant shell and the rather disorderly interior.” 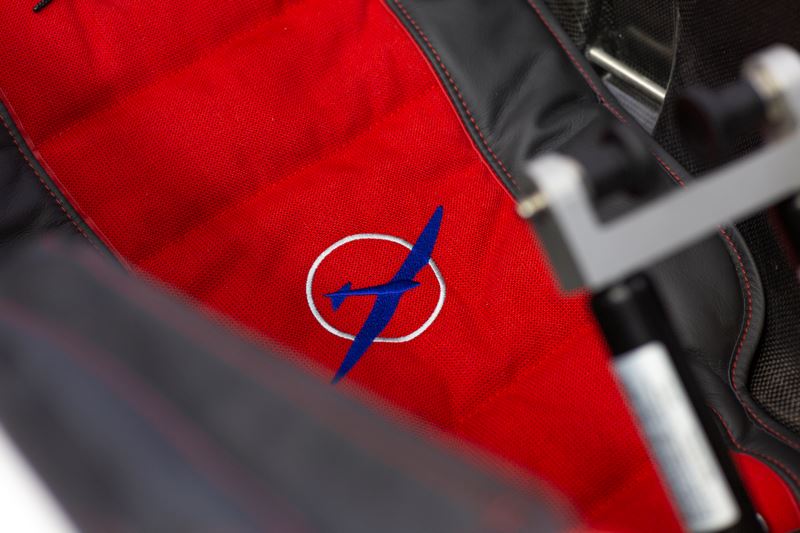 To this day, the legendary Minimoa from the 1930s is the centrepiece
of the Schempp-Hirth logo, seen here on the pilot’s seat pad. 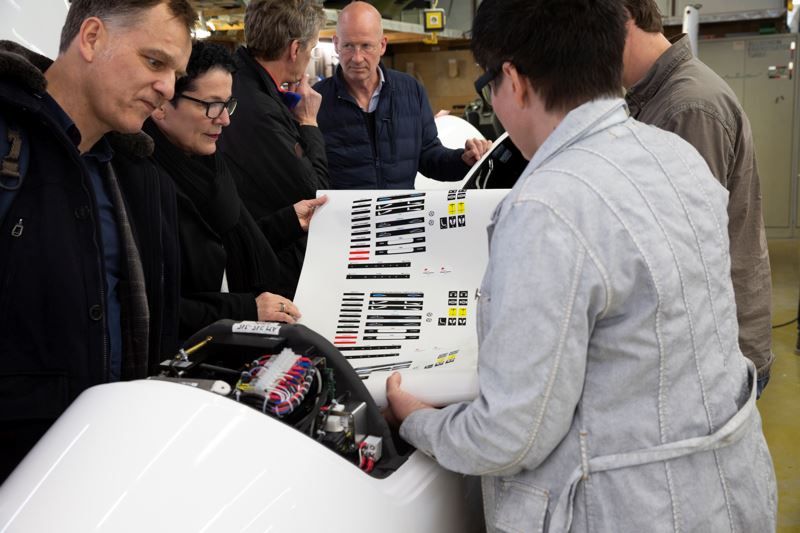 Stickers in the cockpit contain important instructions for the pilots –
so it’s good if the information is displayed consistently.
From left: Ralf Holighaus and Petra Kurz-Ottenwälder
Far right: Carmen Hinderberger

As a result, the focus was placed on aspects that could be implemented without technical changes or the even less desirable necessity of renewed, time-consuming certification. The dashboard, consisting of instruments that are individually combined by the buyer, was left untouched, as was the position of the various levers that control the air brakes, flaps and landing gear mechanically. Their handles, however, which can be seen as the haptic interface with the aircraft, were made more ergonomic and coded according to function by means of coloured rings. Besides clarifying the operation of the aircraft in the confined space of the cockpit, that underscores the link with the manufacturer too. “Our design always aims to promote the manufacturer by incorporating branding elements,” says Petra Kurz-Ottenwälder. “It’s all about using haptic and visual anchors to create a special and distinctive brand feeling.”

That includes things like eliminating the neutral grey coating that used to conceal the cockpit’s carbon inner shell. Now, the arrangement of carbon mats that lines the interior of the new Arcus is fully visible. The backrest, the angle of which can now be adjusted by means of a gas spring, is likewise made of carbon fibre. “Why hide such a high-end material? It demonstrates our expertise when it comes to laminates. Besides, none of our competitors does it, so it gives us a USP,” explains Ralf Holighaus. In fact, all the aircraft that leave the production halls in Kirchheim are made of fibre-reinforced material – not just the wings but the fuselage, tail and cockpit shell as well. In addition, the smart CFRP shell of the cockpit is reinforced with aramid too. In the case of a crash, it absorbs energy and prevents the CFRP elements from breaking. 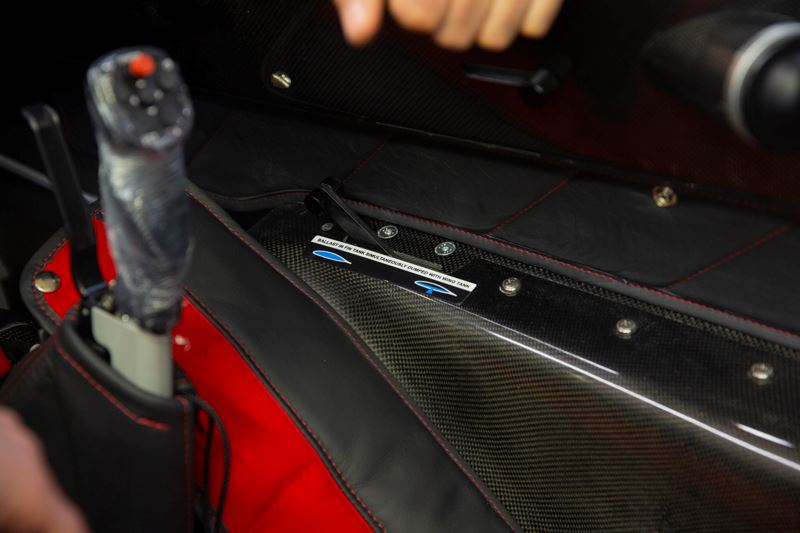 A trial run with the now matt and consistently designed instructions
in the cockpit, which shows off its CFRP interior for the first time. 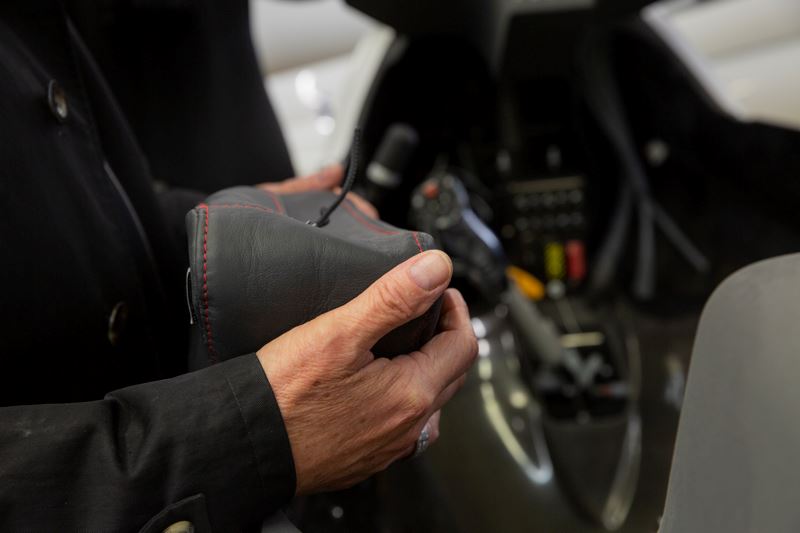 Details are always important: Max Ottenwälder checking the handmade
storage bags for the pilot’s equipment. In the cockpit, it’s vital for
everything to have its place.

A booklet instead of sticker chaos

The cockpit of a sailplane is traditionally equipped with all sorts of different instructions – mostly in the form of stickers that label functions or contain basic model-specific instructions. In the case of motorised models like the self-launching Arcus M, there’s additional information about the engine too. “The cockpit was covered in stickers,” says Carmen Hinderberger of Ottenwälder und Ottenwälder. “And almost every single one of them used different typography and different colours.” So the designers set about harmonising the icons, fonts, line thicknesses and colours. Now the basic information is summarised in a booklet that’s kept in place by a magnetic holder on the side of the cockpit for easy access – and thus eliminates the visibility problems associated with the stickers it replaces. What’s more, in future the remaining function labels on the instruments and handles will have a matt, non-reflective finish rather than being printed on shiny film. 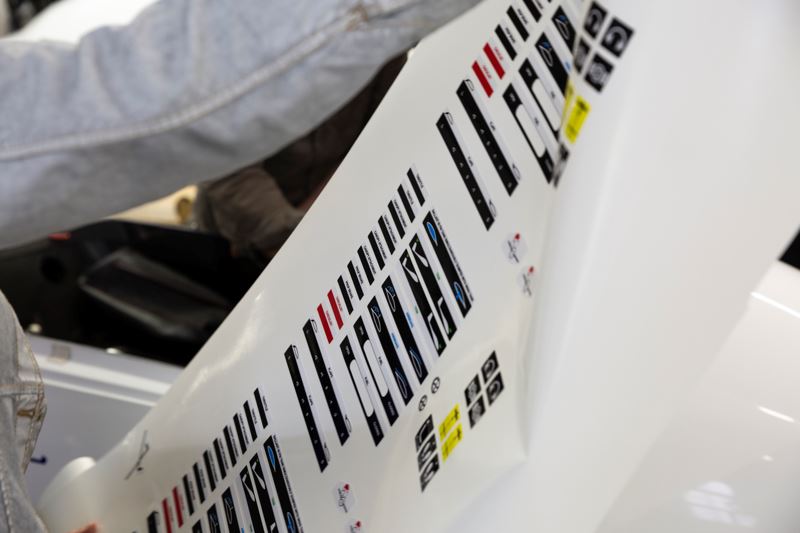 One small step for the design, one giant leap for the industry:
for the first time, the model-specific instructions and function labels
have a consistent graphic design and are easier to read.

The update of the two-seater Arcus series is starting with the M version and will be presented in time for the Aero 2019 show in Friedrichshafen (10-14 April 2019). With its 20-metre wingspan, Arcus is one of the company’s bestsellers: more than 30 of the sailplanes are made in Kirchheim every year. “The self-launching M version accounts for 80% of that,” says Andreas Lutz, the responsible design engineer. Like most of his colleagues, he too is a glider pilot and has twice been European Champion – with an Arcus. Behind the cockpit there’s a two-stroke 68 hp engine that folds out of the fuselage when required – either for launching the aircraft without the need for a winch or towing or for sustaining flight in zones with weak thermal lift. That makes the Arcus M the logical starting point for optimisations, which can then be transferred to the other versions – along with the new design elements, of course. Nor does Holighaus exclude the possibility of a transfer to other aircraft: “We’re feeling our way carefully and testing how our customers and the industry react.” Because despite the hi-tech aircraft it produces, this is still quite a conservative sector; in general aviation – the category that small motorised aircraft fall under – design has played virtually no role at all up until now. “It was a totally new area for us too,” says Max Ottenwälder. “We immersed ourselves in a completely new, fascinating world where we still see a lot of potential. It’s a big challenge, but an exciting one.” Holighaus adds: “Despite the considerable limitations that Ottenwälder und Ottenwälder had to deal with, we couldn’t be happier with the first improvements that have been achieved and the great teamwork. We’re already looking forward to the next steps.” 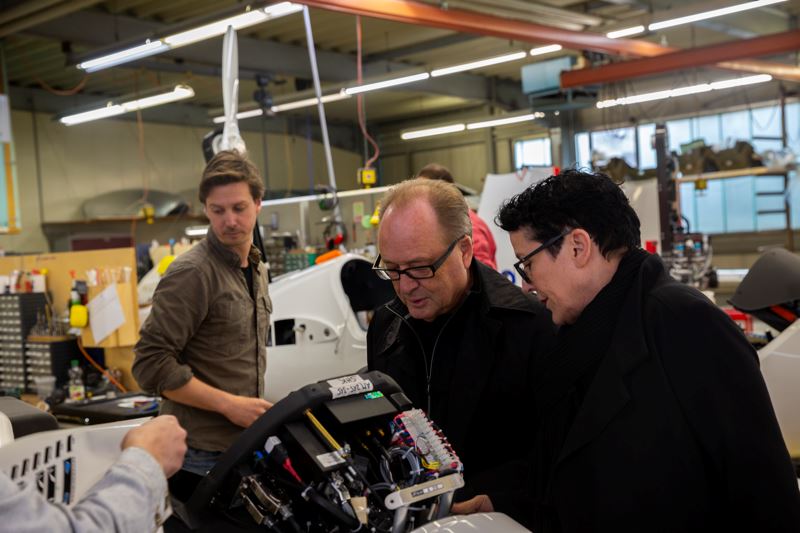 The family-run company was founded in Göppingen in 1935 and has been based in Kirchheim/Teck since 1937. Its early bestsellers include the legendary Minimoa with its characteristic bent wings. It can still be seen at air shows to this very day – and is still the centrepiece of the company’s logo.
Today Schempp-Hirth makes high-performance sailplanes that win top places in competitions all over the world. Approximately 100 specialists laminate, assemble, polish and finish a maximum of 100 aircraft per year, entirely by hand.
www.schempp-hirth.com

Founded in 1991, the eight-strong team led by Petra Kurz-Ottenwälder and Max Ottenwälder addresses a broad spectrum of projects in the field of industrial design, including complex machinery for the packaging industry and the medical technology sector. Their portfolio also includes lighting, charging stations and toothbrushes.
www.ottenwaelder.de